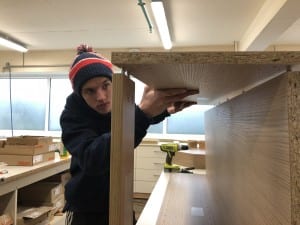 The delighted young man beat other finalists from Kingsway Veterinary Group and catering suppliers Coffee Care to clinch the accolade at a glittering awards ceremony at The Rendezvous Hotel on 22nd March.

The independent team of judges were impressed by Luke’s rapid progress at the firm, which was also a finalist in the Best Manufacturing category of the prestigious local business awards.

Eighteen year old Luke Baldwin joined the team at Hartleys in October 2017. Previously working in the sport and hospitality sector, he responded to an advertisement for a Trainee Cabinet Maker which attracted him because his father is a joiner and Luke had always enjoyed helping him in his spare time. 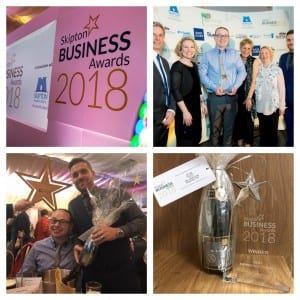 Luke is being trained in all areas of production at Hartleys, but specifically with a view to taking over the management of the cabinet making area. He has been learning the craftsmanship skills required for assembling robust cabinets including working from cutting lists, beading up doors, applying edging and responsibility for quality control.  His role involves operating specialist machinery such as the carcass clamp and drilling machine.

Not limited to working within the factory confines, Luke has also developed customer facing skills when assigned to delivery work, which also encompasses intelligent loading and unloading of the van for safe transit of finished bespoke furniture.

Founder of the firm, Richard Hartley was at the awards and commented:

“We’re really thrilled Luke has won the award.  It’s well deserved as he has fitted in very well to become a key member of the team at Hartleys, taking everything that’s thrown at him and already working independently in some areas”.

Outside work Luke is a talented footballer who has played at professional clubs Bradford City, Hull City and Leeds and is currently playing for Silsden FC.

We design, craft and install beautiful fitted furniture for bedrooms, home-studies and multipurpose rooms. Making the very best use of your space, we create stylish storage solutions specifically tailored to your room’s architectural features and your individual taste and lifestyle. So every room we design is as unique as you are.

Morning all. A bright splash of colour for you this Monday, courtesy of Days Of The Year and #ImproveYourOfficeDay!

😊🌿 So today is all about making your work space an enjoyable place to be, which is important for our productivity levels and mental wellbeing. You could simply add a vase of fresh flowers to your desk, buy some new stationery in your favourite design or even spring clean your office…😉

If you’re considering something bigger, like a desk upgrade or improving your #storage provision, you know where to come!

Wishing you all a very good start to the week 👍 What’s your Monday looking like?

Working in a plain, corporate environment can be demoralizing at the best of times; so why not take some steps to improve your work environment? Improve